Results From Our First Fund

Final update: Fund closed after 2.5 years in operation, in oct 2021, with a 203% return on investment and 137% return to investors. Despite initially impressive growth, the final results were moderate due to the effects of google algo updates, and our delays in flipping the higher risk assets. Upon analyzing the results, we’ve adapted our model to focusing on bigger, and lower risk websites, via our group buys.

—
We are excited to share the results from our first small fund!
We’ve been buying, growing and selling online businesses for over 15 years now and this was the first time we set up a fund with several investors. Previously we used our own capital for all the deals, and occasionally allowed some investors or partners to join.
We acquired the first deal through that fund in January 2019 and some others from February to July 2019. More recently, we’ve also acquired several sites in January to July 2020. This fund was generally targeted higher risk, lower multiple deals, that had higher growth potential and a short term flipping strategy.
In the first 1.5 years of the fund, we’ve acquired 9 businesses with a Total Acquisition Cost of $457K, with the capital invested throughout this period.
For the past 18 months, we have generated $346K in revenue from affiliate sales, digital product sales, and advertising and had $65K in operating expenses. 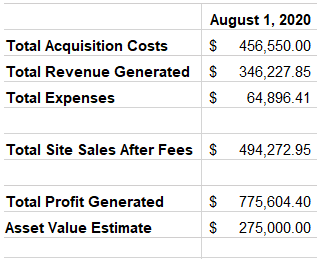 We’ve sold 4 of the businesses for a combined amount of $494K (after all transaction fees, deal fees, and commissions), and we still have 5 remaining sites with a combined estimated fair market value of $275K.
If the fund were to be liquidated now at a fair market value, the Total Value would be $1,050,604, with a Total Return of 130%.
The fund has been operating for 1.5 years, but on average most assets were held and the capital was invested close to 1 year. Most capital calls happened between June to July 2019, and since then we’ve distributed proceeds from sales immediately.
To most industry outsiders, these returns may look incredible or unrealistic. But for anyone who has bought or managed a website, it is not unusual to get a 100%+ return on a deal. The challenge lies in doing it consistently and repeatedly and that has been our main objective for the past 15+ years in this space.
This fund was also hit substantially by COVID-19 and by the recent drop on Amazon Commissions. Otherwise, the return would have probably been close to double.
But since our SEO efforts were continuously successful overall, it didn’t look as bad as it could’ve been:

We’ve had many of the sites relying on Amazon Associates for revenue. However, in some cases, we were able to substitute it with other affiliate programs and even come out of on top:

Some of the sites didn’t perform very well
One site was sold at break-even: it was acquired for $45.2k and sold at $27.5K. The site has also generated $18K in total monthly profit.
Our lowest deals were two of our smallest acquisitions for $10.1K and for $6.3K. The first one is only generating about $150 in monthly profit now due to some drops in rankings. We are still working on growing it, but at this point we’ve accepted that this is likely to be a loss. For the second one, we’ve combined with another much bigger site we had in the same niche and were able to achieve some benefits. However, on its own, the site was barely breaking even due to high management costs.
A site in the education niche suffered a lot from COVID-19 (as most universities are closed). The site is now recovering and should turn a profit soon:

Most Acquisitions were very profitable
Our most profitable deal was a site we acquired for $51.3K. It has generated $24K in profit and was sold for $142.5K in 9 months — a close to 200% annual return.

Several other deals had similar returns of 100%-200% (if the sites are sold now at fair market price) and others had more modest returns of under 100%.
Our most complex site is a SaaS business. It required us to work with 3 different programmers to maintain, improve, fix issues. However,  it is also one of our most profitable businesses as we are able to grow it steadily.
Our biggest deal for the fund was the sale of two sites for $340K:

Our average deal size in this fund is $50.7K. We found this to be a good range to target initially, however, we are now focusing on bigger deals as they tend to be much more profitable.

We’ve tallied up the recent data to provide this intermediate update, and the overall return increased to 134.77%. We’ve acquired 3 more websites for this fund since, and it now has 8 properties (or 9, as some are combined), and we were able to grow most of the websites revenue, except two, which had some drops in rankings. However, the overall profit and portfolio growth increased. The investors also decided to reinvest a lot of profits back for future acquisitions and we are now looking several more bigger deals for this fund.
A a small family fund, this is closed to new participants, however, we are establishing more funds and opportunities for new investors currently as well. 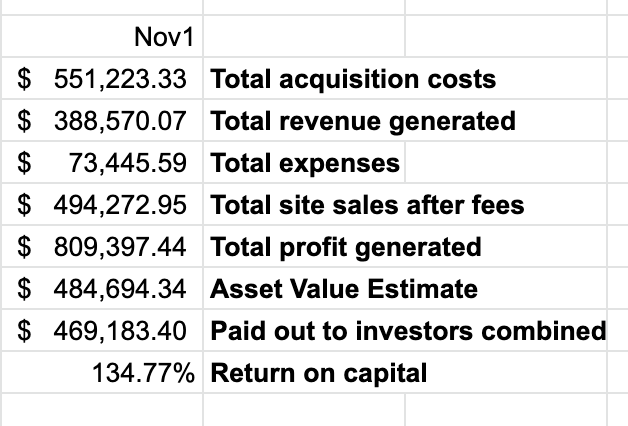 We’ve officially closed our first fund in Oct 2021, after finalizing the Q3 2021 reports, after about 2.5 years of operation. Af the time of closing most websites were sold, while several smaller websites were transferred directly to investors. Those were mostly passive, affiliate sites that required limited maintenance. Below are the final calculations of how it performed.

Notes and explanations of the final results

Quick Updates on our Other Funds (Updated Nov 2022)