One of the worst parts of selling websites on Flippa is constantly having to deal with trolls. There is a large and growing number of Flippa members who never buy any websites, but like to spread false rumors and attack sellers for outrageous accusations and claims. I encounter this in almost every auction I run, unfortunately.

Here are some recent examples from my latest auction, before Flippa support removes them – unfortunately, it’s very slow, can take a day or two for Flippa support to reply to a ticket. 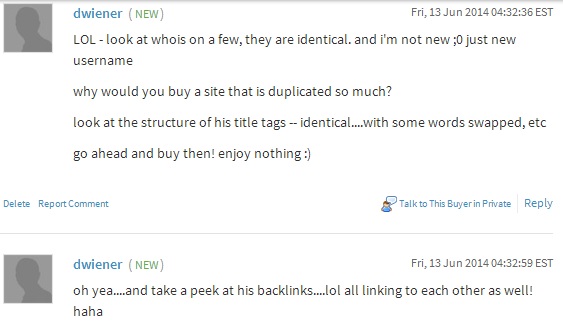 I didn’t actually delete his comment, although I should have. They were deleted by Flippa’s support, after some time. None of his claims are true of course, and it’s very easy to verify by checking whois and all the other data on sites. Which is quite strange as he must have realized that too. So it’s most likely that he has used his other username in order to try to spread some false rumors about the auction to try to get it cheaper. It’s actually a lot more common on Flippa than you’d expect.

It’s a shame that Flippa doesn’t ban such members and allow this type of behavior. Even when they are eventually banned, after multiple reports, it’s easy enough to make a new account and post more garbage to try to discourage other bidders from participating in the auction. Since it’s a no reserve auction naturally he can expect to get the site cheaper if other bidders decide to believe it.

These were actually the two sites being sold in the listing – it says so right there in the first line of the listing. So he most likely didn’t read any of it.

Do you think it’s just a bored kid trolling or someone trying to affect the auction outcome to get the site cheaper?

Update: after a few hours the Flippa support replied that the user received a “warning”.. twice. Some of his comments were also removed, but not all of them.

5 Replies to “Trolls taking over Flippa”