Case Study: 420 Beginner – How We Generated $200K in 5 Months by Helping People Grow Weed at Home

We acquired this 2-year old site in 2017 for $50K after the owner reached out to us in February that year looking to sell. The website, 420Beginner.com, helps people grow marijuana at home.

The website was an affiliate site and was being monetized mainly through advertising affiliate products, and some revenue through Adsense.

It mostly sold specialized growing lights, and other similar more mainstream products, via the Amazon Affiliate Program. The site also published articles and reviews of products one would need to buy in order to grow weed at home.

We sold the site 5 months later for $165k. This case study will explore the ways in which we were able to boost revenue and generate cash this quickly.

There were some risks and difficulties to consider when buying this site. But there was also potential for growth.

The legal landscape in the marijuana industry is complicated, so the site was only able to monetize through affiliate sales of certain products.

Although the site had been going for 2 years, the seller didn’t have proper data and details.

Google analytics only contained partial data from some previous months and some more recent details from the past few weeks. However, he explained that he did a theme redesign recently, and forgot to put the code back on.

Revenue was all over the place: the lowest months being $600-$1000 in monthly revenue, and the highest was above $5K.

The revenue data was also spotty. The seller used several Amazon Affiliate accounts, and one of them had been closed (he explained this was in relation to a different site, and we were able to verify that). The site also used multiple other Affiliate Programs and AdSense.

The seller was Vietnamese, so there were some challenges with communication. He was looking to sell quickly for personal reasons.

All these reasons combined are more than enough to deter the vast majority of buyers. However, we were mostly focusing on the fundamentals and our own due diligence process to determine the value and future cash flow of the business.

To do due diligence on this seller, we used our typical, detailed process. This is usually performed in stages and broken into 3 parts. Since we review hundreds of deals, we initially do a quick evaluation of each part. Then closer to completion, as the deal becomes more likely, we dig a lot deeper.

The first part of our diligence process consists of looking into the numbers:

Although fairly self-explanatory and necessary for nearly all buyers, it’s important to not just look at the numbers, but also understand them. To see the trends and reasons behind them.

After verifying the numbers, filling out and confirming a P&L sheet, the numbers looked quite strange. However, each part had a reasonable explanation which we were able to confirm.

Based on current numbers and our analysis, we made some projections that showed that we should be able to stabilize it and increase revenue by improving conversions and placements.

Reviewing the opportunities is a crucial part of a due diligence process. It is important to get realistic projections and expectations for adapting pricing models, and further strategies for growth and resale. It’s also important to distinguish short and long-term opportunities, as well as account for execution difficulty and the likelihood of success with each.

The business had clear opportunities in:

Our evaluation showed that we can aim to get to $6K-$8K in profit in the short term.

Assessing risks is the most important and the most difficult part of the due diligence process, and something that many buyers tend to do wrong.

What many people often perceive as risks (lack of well-organized data and proofs, age, PBNs, niche, etc.) are usually easily fixable, or can be accounted for in price.

The main risks here had to do with SEO and maintaining the rankings for the top keywords, and our analysis showed that the link profile and content were good enough. Trends were also good due to the rapid growth of the industry. We confirmed that the site didn’t break any Amazon Associates Terms of Service (ToS). We were also able to verify or confirm the seller profiles, review his other properties, and establish the reasons for missing data.

The seller was looking to sell quickly in order to pay some debts. This, of course, raised some potential issues and red flags. However, in this case, his explanation was acceptable and it’s not uncommon among our clients, as we focus on buying quickly.

The negotiation was brief, we agreed on a price, exact terms, after-sale support, and what’s included. It was also revealed that he had another site in the same niche, so we insisted on including it and getting a non-competition commitment from the seller.

We usually do most transactions via escrow.com. We’ve done over 100 deals through them, and as an official partner, we also get better support and terms.

A transaction typically involves a sales agreement, which describes the exact steps, process, numbers, and terms of the deal, and a short inspection period.

Here is the process in more detail:

What We Did to Grow the Site

We always have a plan for each business we buy with details of what we are going to do in the first month, first 6 months, first 12 months. The plans include target resale date and price, work that needs to be performed for maintenance and operation on a weekly/daily basis, and the manager in charge of the project, as well as other people involved in the operation and further growth of the business.

The first few weeks after the acquisition are the most important! Buyers always underestimate the amount of work that needs to be performed at this stage, even with simple content sites.

It’s important to do audits and planning, and assign responsibility, budgets, resources for the project. In the first couple of weeks after the deal closed, we:

The plan was to remove AdSense, as the AdSense revenue was much lower compared to Amazon and seemed a waste.

Additionally, we planned to add 1 new post per month.

We decided to work on building new high-quality links for the website every month. For this one, we set a target resale time of 3-6 months.

After about 4 months of adding new articles and building some links occasionally, we were able to increase the revenue up to $8K.

We added more affiliate links where possible and repositioned the items. We replaced any products not in stock, updated affiliate IDs for various extra programs, and did some basic tests to increase conversions. 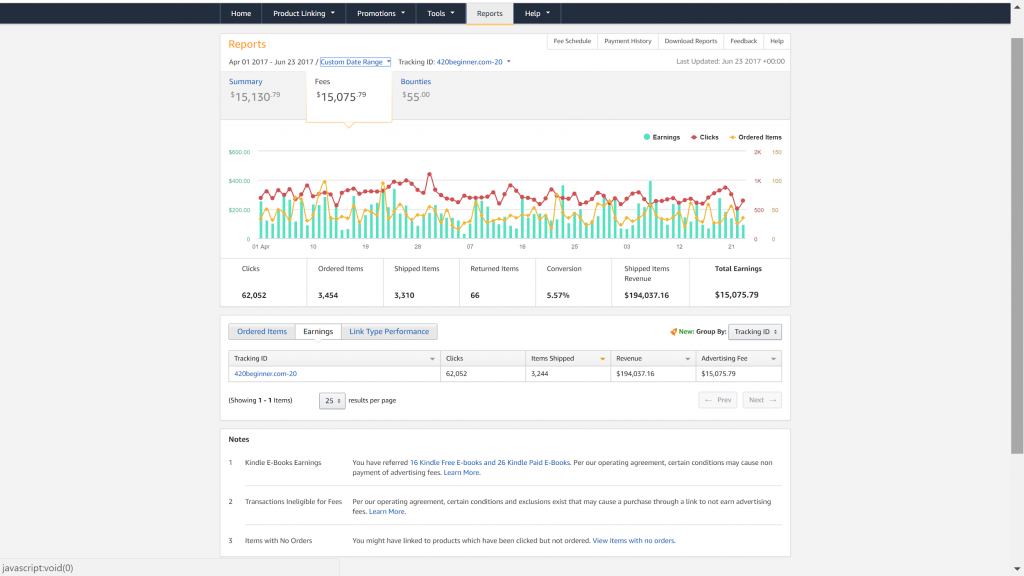 Mitigate Risk with a Quick Sale

Our experience shows that the main risk in operating a portfolio of businesses comes from extending holding periods of individual sites. Therefore we usually mitigate that by reselling fast (in under 1 year) or clustering similar sites together, so we can be operated as a group to reduce individual risks.

In June 2017, the site was ready for sale – with 3 months of solid revenue, averaging around $8K/month.

We collected all the data and published a Flippa auction for the site to attract buyers. The auction was quite popular, getting a lot of bids and attention. But Flippa didn’t have enough buyers who had a sizable enough budget bidding in auctions at that time, so we actually had to re-list it and were able to find a buyer at the second attempt.

The site was sold via a Flippa listing for $165K, and they even did an interview and a case study of their own about it later.

We helped the buyer initially over the first few months to manage it, and organize content and link-building updates, as well as find extra alternative monetization methods. The buyer had little previous experience with operating similar websites, so we helped him hire and train an assistant to maintain and grow the business further. We have also been following up frequently to help with advice or suggestions for further growth.

This was a rather profitable and successful deal for us, generating over $200K in revenue and from the sale after about 5 months of operating the business, having spent around $50K total for purchase and growth expenses.

The buyer was enthusiastic about the niche and continued to grow and expand the business and update both sites. As cannabis seeds and products become more widely sold and the legal picture is changing towards full legalization, the industry has had tremendous growth in the past years.