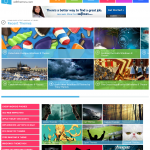 I receive many questions about this every week, and many people want to learn how to flip websites for profit. While most of my deals are private, and I don’t post details publicly to protect the buyers and sellers I deal with, in these posts I’ll share all the info about one site that I bought and sold on flippa recently.

The site in question is w8themes.com. I bought it, with a partner, back in June last year on flippa. It was a good looking site, with stable stats and traffic and after some proper due diligence, research, and a discussion with the seller we decided it would be a good site to buy so we can increase traffic and revenue. It had a lot of traffic, decent quality content, many links and the topic is fairly big and general so more content can be added to target additional keywords.

After buying the site we added about 100 new posts on carefully researched topics and tried to experiment a bit with ad placements to increase AdSense ctr. The ctr still stayed extremely low, mainly due to the theme, which makes it very hard to properly blend the ads into the content, and since the theme was quite complicated we decided just to keep it as it is. Of course, there were many other revenue options that could have been employed if we kept the site, but the main focus was on traffic. The additional posts did very well since the site already had a strong link profile, and the posts rank great in google images (e.g. it ranks in top 10 in google images for huge keywords like ‘Christmas’, ‘hello kitty’ etc).

Besides buying, selling, and adding the articles the site was mostly left unattended. We didn’t do any link building (it already had many links), didn’t bother much with further optimizations. As it usually happens with such sites, you add some good content and then just wait to see if it would rank and bring traffic. And it did! So it was a time to sell.

About 7 months after buying the site we decided it’s time to sell, simply to lock in the profits and reinvest in other properties. For such sites, I usually do a no reserve auction, with the premium upgrade at Flippa to attract more attention and more bids.  It’s very important to properly collect and present all the stats in an auction.  Selling can also be very time consuming, the auction generated over 4k views and I had over 20 people contact me with questions.

Sometimes Flippa auctions end up with a nonpaying winner, so I believe it’s very important to try to check the top bidders to make sure they have funds available and are serious about buying if you simply approve all bids you increase the likelihood of having the buyer fail to follow through with the purchase and then you’d have to relist the site and run another auction, which besides being quite a time consuming, usually ends up selling for significantly less. So after discussing it with a few top bidders I decided to sell at a lower bin earlier rather than have the auction run till the end (which may have brought a higher price but could also result in a non-paying bidder).

After the sale, I also always try to help the buyer with all the transfers and set up as much as possible. So, in this case, I helped the buyer generate and put up his AdSense codes, fixed some tech issues that resulted after the buyer initially tried to do that on his own and changed the wrong code, and helped facilitate further updates and content for the site.

Overall, with the AdSense revenues and sale, after all the fees and expenses it made a bit over $6K in pure profit.